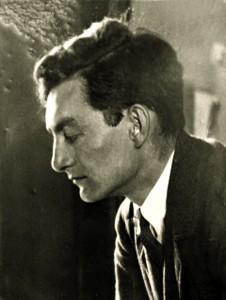 JOSEPH GRAY (1890-1963) was a painter and etcher of landscapes, architectural subjects and battlefield scenes, of which some of his most evocative work hangs in the Imperial War Museum and Regimental Museums throughout Britain. He was born at South Shields, Tyne and Wear, Durham on 6th June 1890. The son of Joseph Gray, a master mariner, Gray junior trained as a sea-going engineer before attending South Shields Art School under John Heys. He travelled widely – to Russia, Germany, Spain, France and Holland – gathering material for his drawings, before moving to Dundee c.1912, to work for the newspaper publisher D.C. Thomson, as an illustrator for the Dundee Courier and other associated press.

The first biography about Joseph Gray and his work was written by his great granddaughter Mary Horlock. Joseph Gray’s Camouflage – a memoir of the artist and camouflage pioneer spanning two world wars, was published in early 2018. The funds to publish the book were sourced by the crowd-funding programme Unbound; and within one month it became 100% fully funded! The book can be ordered direct from Amazon.co.uk. 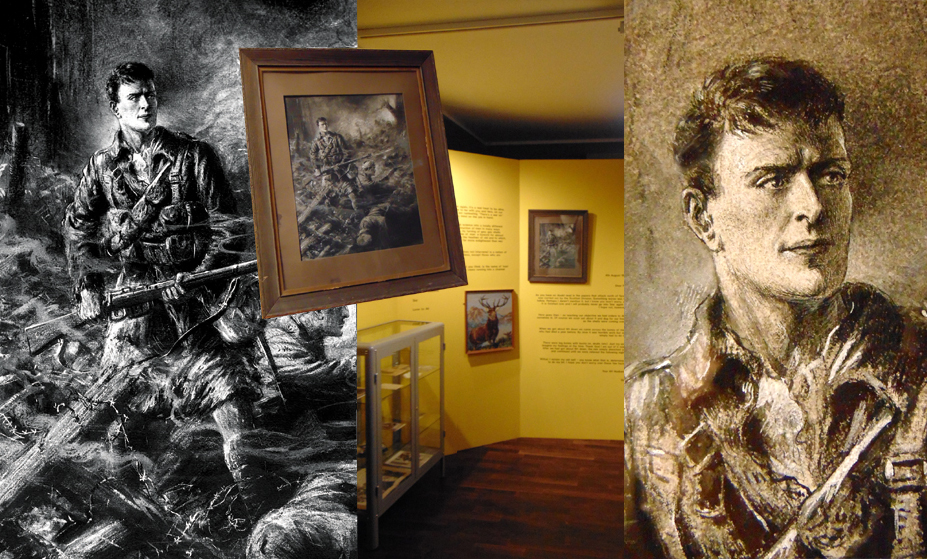 In October 2017 The Highlander’s Museum at Fort George opened it’s latest temporary WWI exhibition Summer Has Been Turned To Winter By The Guns. During a recent museum-wide collections audit the museum came across a long-thought lost Joseph Gray painting, the glass negative of which had been previously uploaded to the Scottish Highlander Photo Archive online database in 2012. The original painting is now a centre-piece of the current exhibition and early documentation seems to indicate the title might be Seaforths: How the 51st Division Held On. Given time, the transcribing of the hundreds of letters from Joseph Gray to Andrew Paterson may reveal more information on the work, but it makes a terrific accompaniment to the Gray painting Loos: Charge of the Highlanders which was gifted to the museum in 2015 by Andrew Paterson’s grandson; and two of the three massive war landscapes by Gray which were gifted to the museum by Paterson’s children. (The third painting in the museum had been donated by Evelyn Barron.) 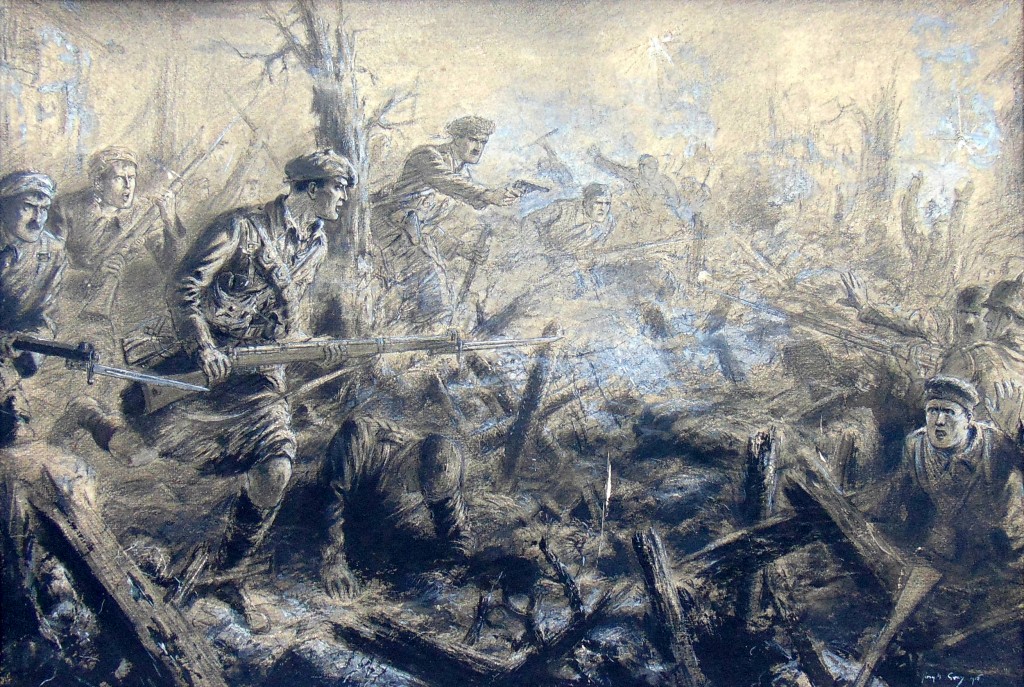 On Saturday 13th June 2015, a long lost original  Joseph Gray artwork was gifted to The Highlanders’ Museum at Fort George by the grandson of Gray’s friend and agent Andrew Paterson. The Paterson family had donated two of the three large Joseph Gray paintings on show in the museum in the 1940s-1950s, and with this untitled Gray original, painted in 1918 and stored in a loft for many years, Andrew Chalmers followed in the tradition of his mother Constance and uncles Hector and Hamish Paterson in presenting it to the Queen’s Own Cameron Highlanders collection. UPDATE: A few weeks after the picture above was donated to The Highlanders’ Museum, a letter from Joseph Gray to Andrew Paterson was discovered in the Paterson Collection archive. Gray had drawn a rough sketch of the above picture, and provided a title for the work. The letter reads: 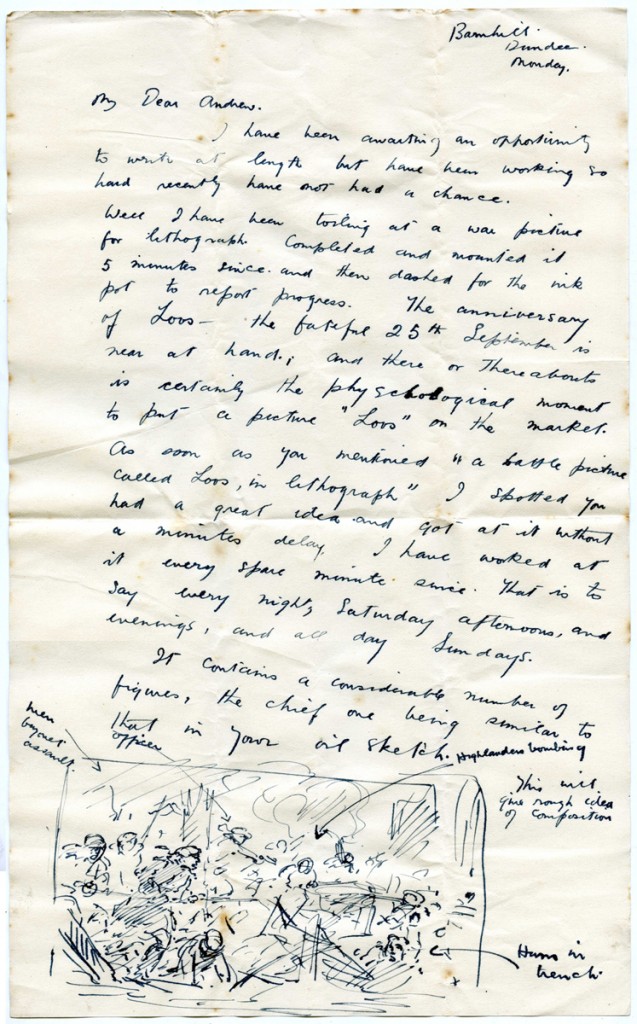 My Dear Andrew,
I have been awaiting the opportunity to write at length but have been working so hard recently have not had a chance. Well I have been toiling at a war picture for lithograph. Completed and mounted it 5 minutes since and then dashed for the ink pot to report progress.
The anniversary of Loos – the fateful 25th September is near at hand; and there or thereabouts is certainly the psychological moment to put a picture “Loos” on the market. As soon as you mentioned “a battle picture called Loos, in lithograph” I spotted you had a great idea and got at it without a minutes delay. I have worked at it every spare minute since. That is to say every night, Saturday afternoons, and evenings, and all day Sundays.
It contains a considerable number of figures, the chief one being similar to that in your oil sketch. I think I have pulled off one of my best. The whole thing is full of atmosphere, movement and ginger, but by jove! it has taken some work. It is a good size. 13 1/4 inches by 20 inches, and when mounted on 30 x 22 board will make a good big picture.
I think I have got the real Celtic spirit of the offensive into it and I believe it will go… You will notice title of picture will be “LOOS” CHARGE OF THE HIGHLANDERS – so that it will appeal to everybody and not only to one potential regiment. Now there has never been a picture of Loos published. It is the Highlanders battle – certainly THE battle of the first new armies.
Well I will close now. Had really to let you know at once when sketch was done – will write again in a day or two.
Best love to all from both of us.
Yours for ever,  Joe